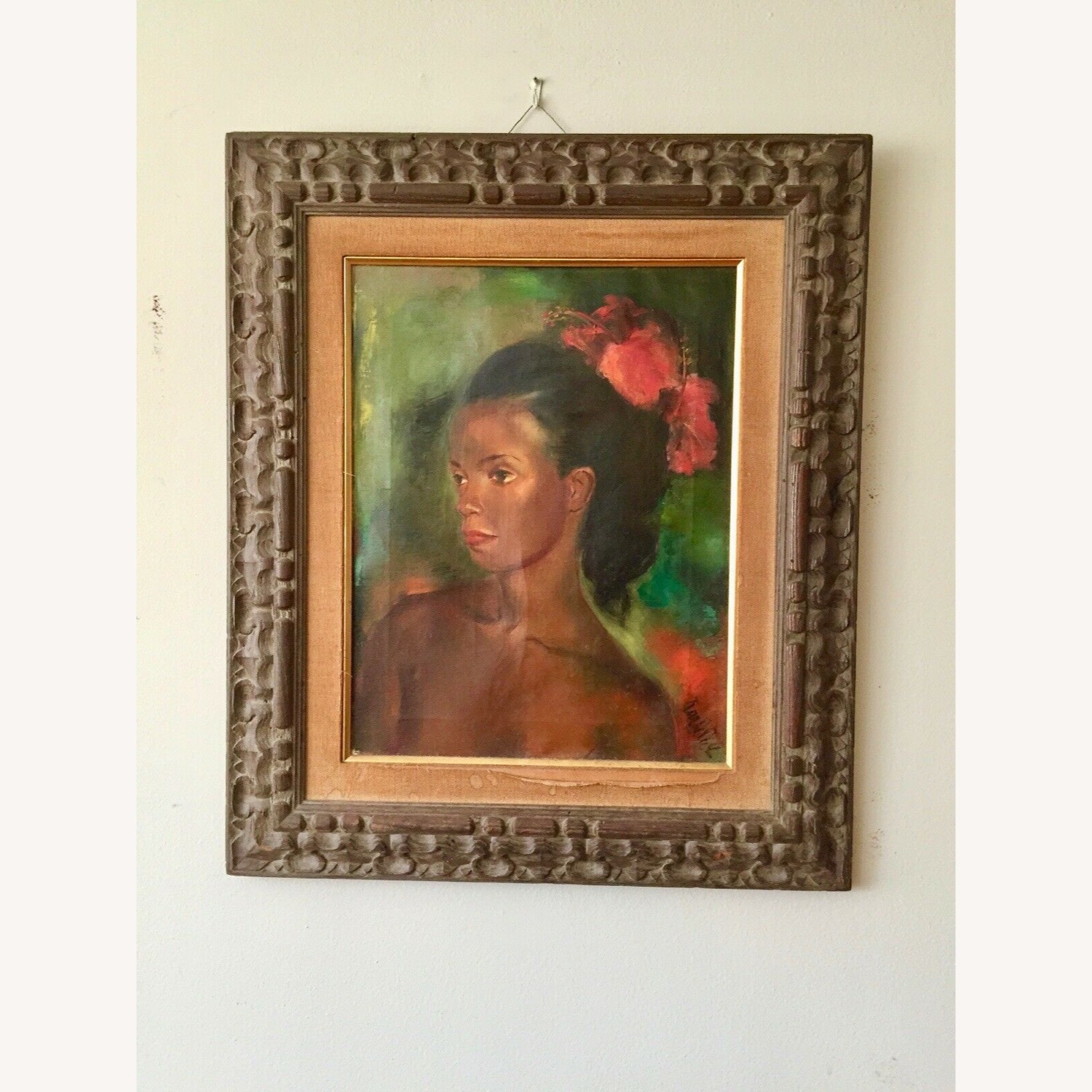 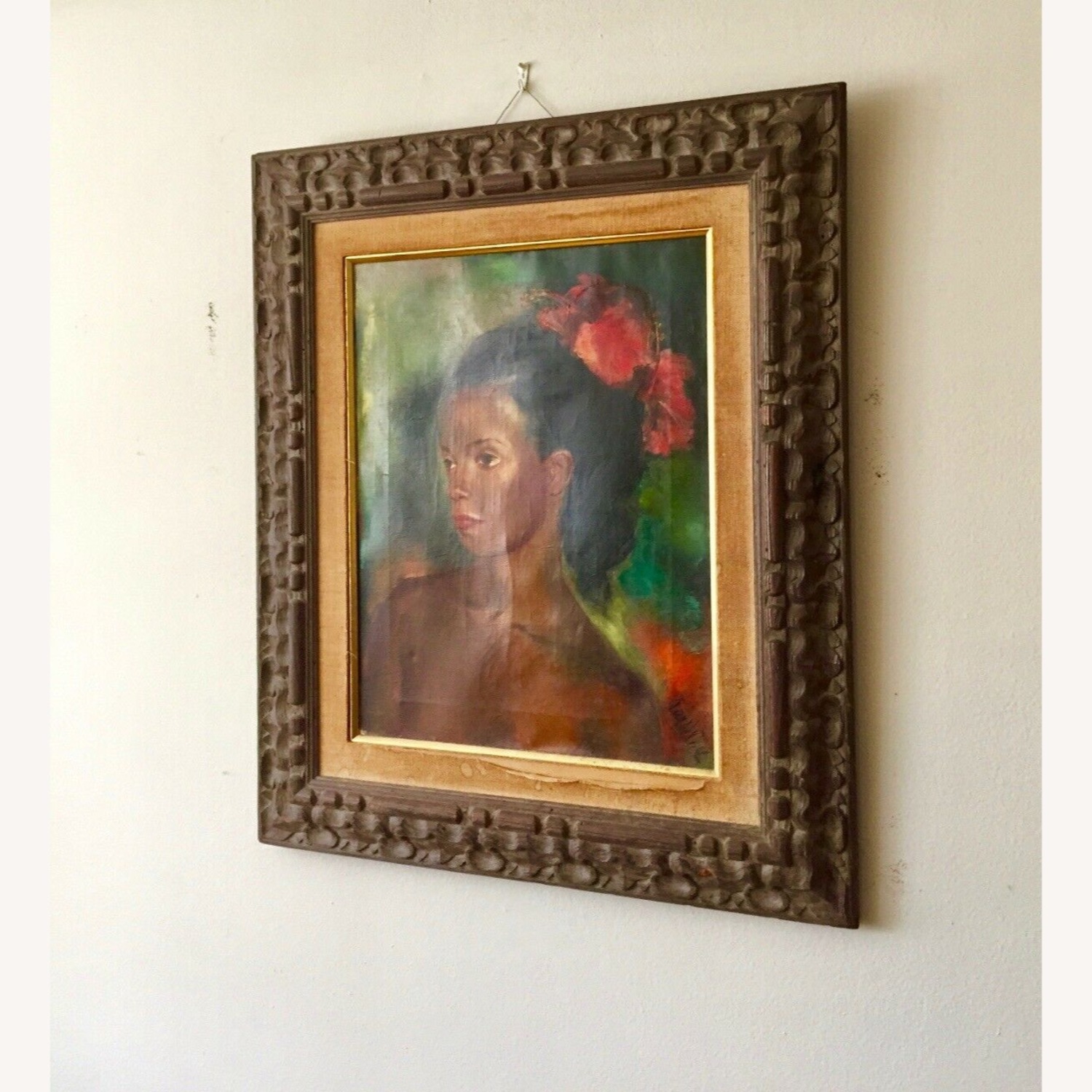 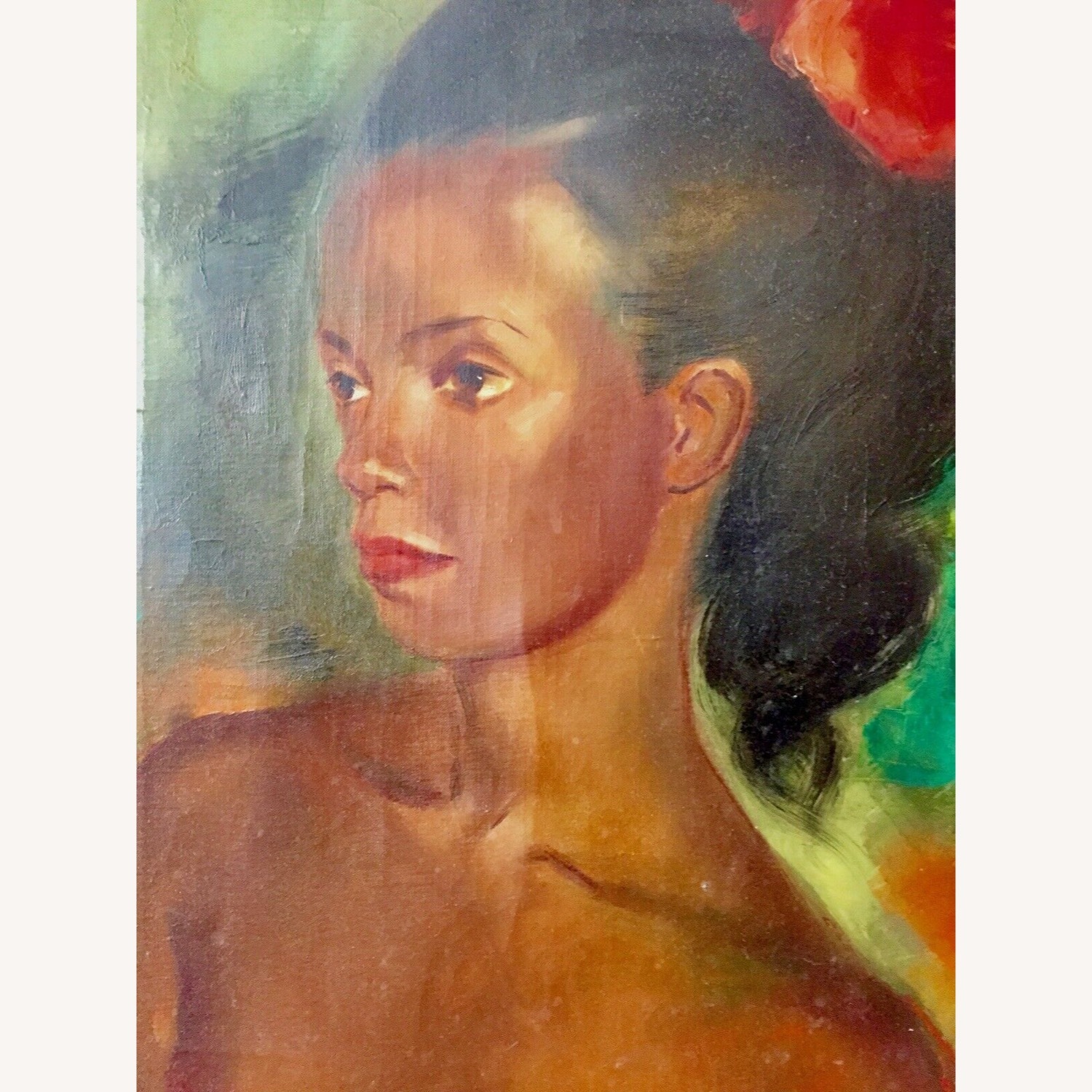 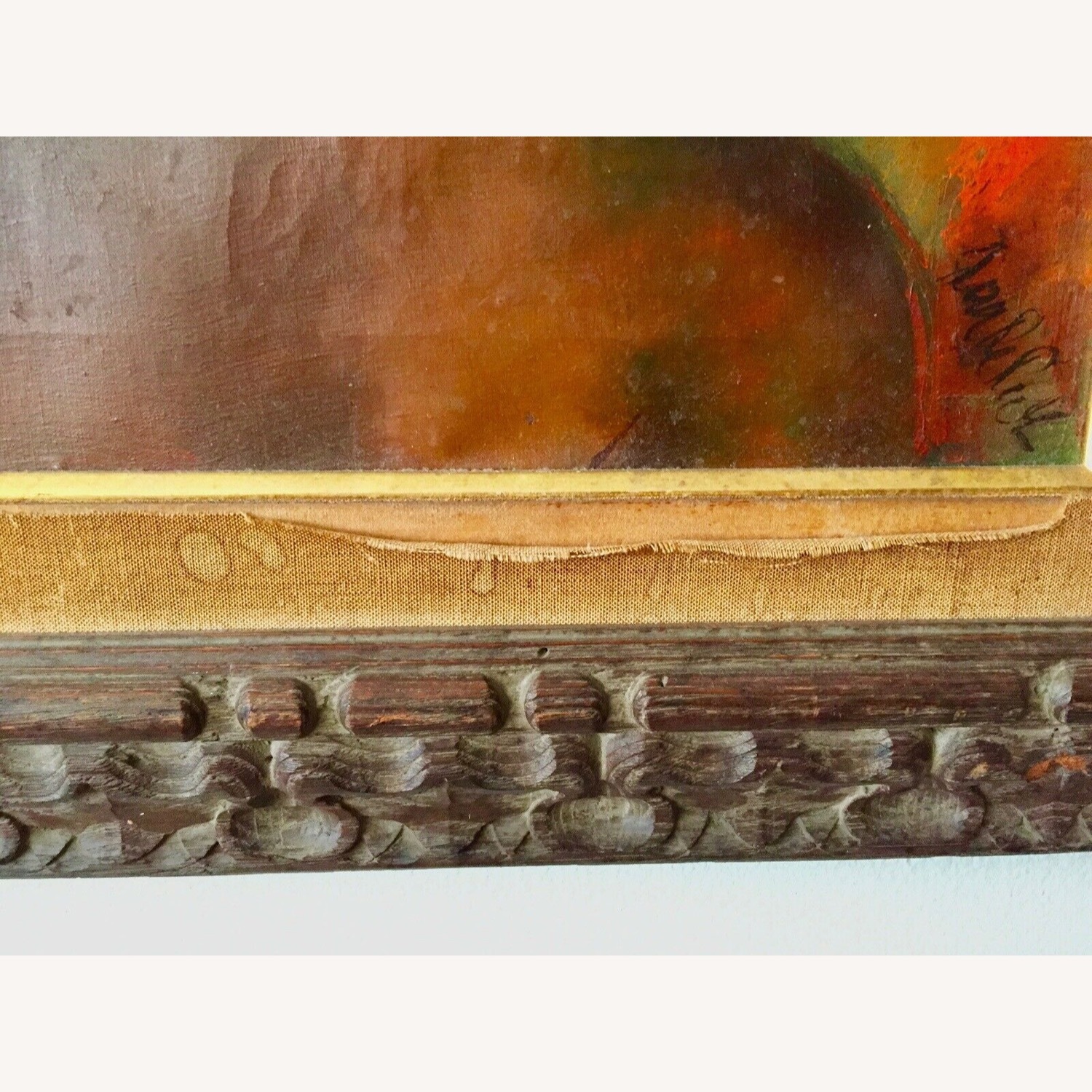 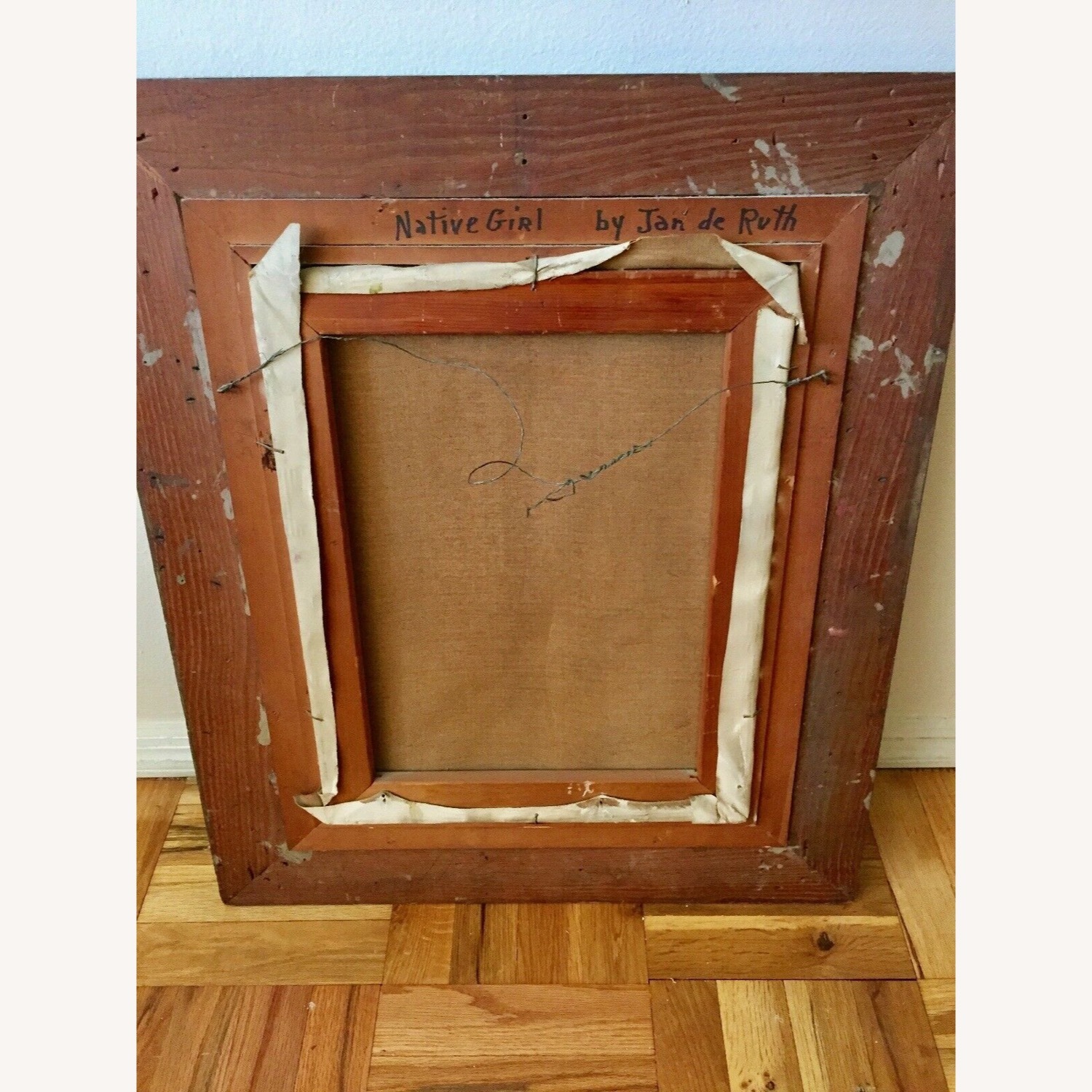 Additional savings may apply if you choose self pickup at checkout.

Seller's Notes: ~Original oil painting on canvas by Jan De Ruth (a.k.a. DeRuth, 1922-1991), in excellent original condition. Signed "Jan De Ruth" in black lower left. Also titled "Native Girl" on back. From a New York estate. ~Jan de Ruth is an American artist who was born in Karlsbad (former Czechoslovakia). He is very well listed, exhibited, and collected. He is the author of "Portrait Painting", and "Painting the Nude". ~Measures 23" across x 28" high framed, 13" x 18" ~ It's a long way from sketching in leftover coffee to painting a portrait of Ethel Kennedy for the cover of Time Magazine, twenty-five years in fact; and during that period, Jan De Ruth's personal experiences have been enough to fill two ordinary lifetimes. Through them all, art has sustained him and been his primary interest. To begin with, De Ruth, a native of Czechoslovakia and now an American citizen, spent the years of World War II being shunted through 5 different concentration camps, including the infamous Auschwitz. He made four escape attempts and finally made good on his fifth try. De Ruth constantly sought materials with which to draw, but "The only things we had were the few pieces of cloth we wore," he recalls. By chance, he was transferred to Germany as part of a labor detail and managed to sneak a pencil away from the camp supervisor-"I became a perfect thief during those years," he says. Jan drew a mother and child on a scrap of paper he scrounged from the factory where he worked, filled it in with shadings of coffee in various strengths-his finger was his brush. He exchanged the sketch for a piece of bread from a camp guard, and in effect, sold his first painting. His work has been acclaimed for combining the technique of the old masters with a modern manner, and has been exhibited in more than 40 one-man shows in galleries and museums across the United States. He has been judged positively by juries in 28 national exhibitions and his numerous awards include the Purchase Prize of the Butler Institute of American Art, and the Gold Medal of the National Arts Club.

Condition: Satisfactory: Moderate wear and tear, but still has many good years left