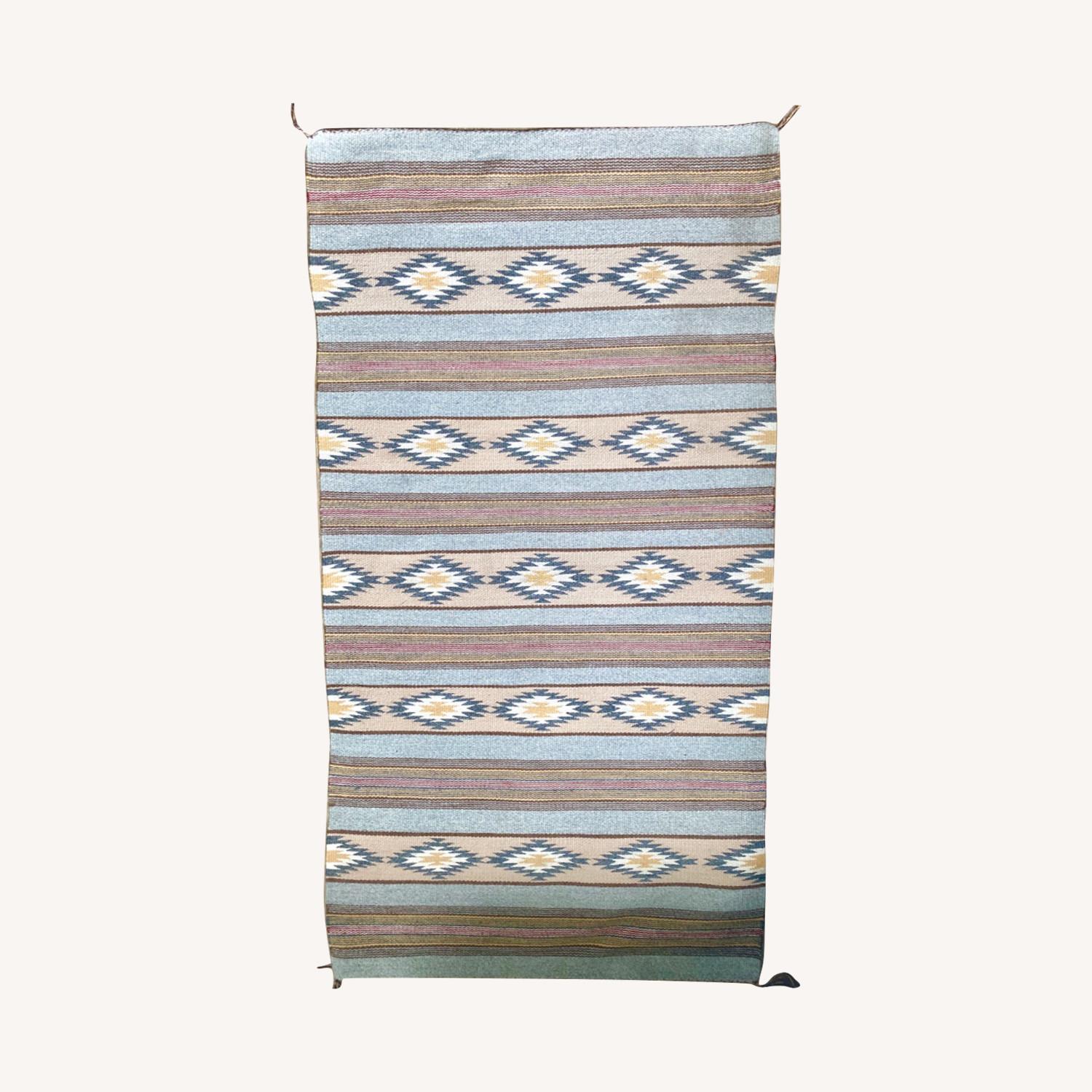 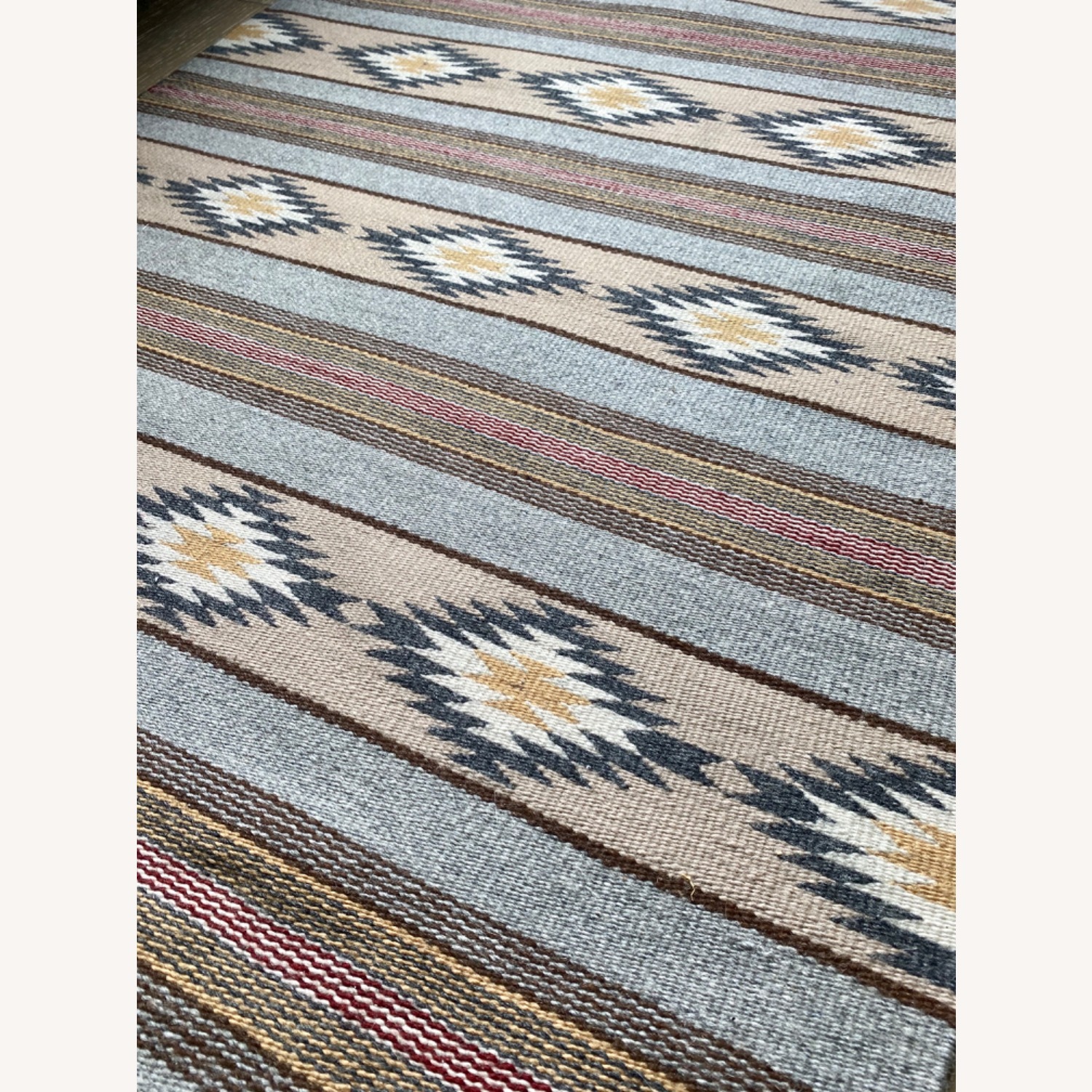 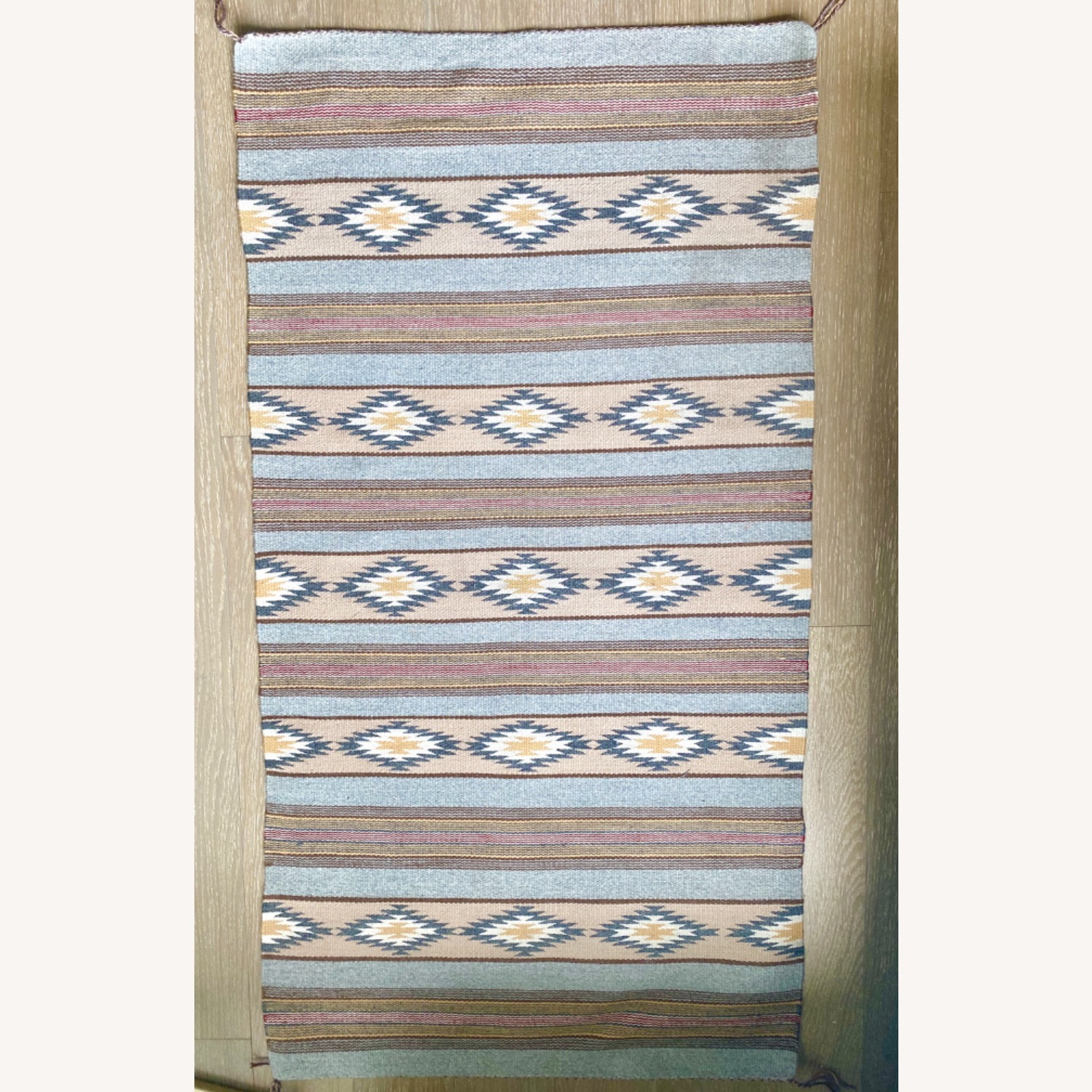 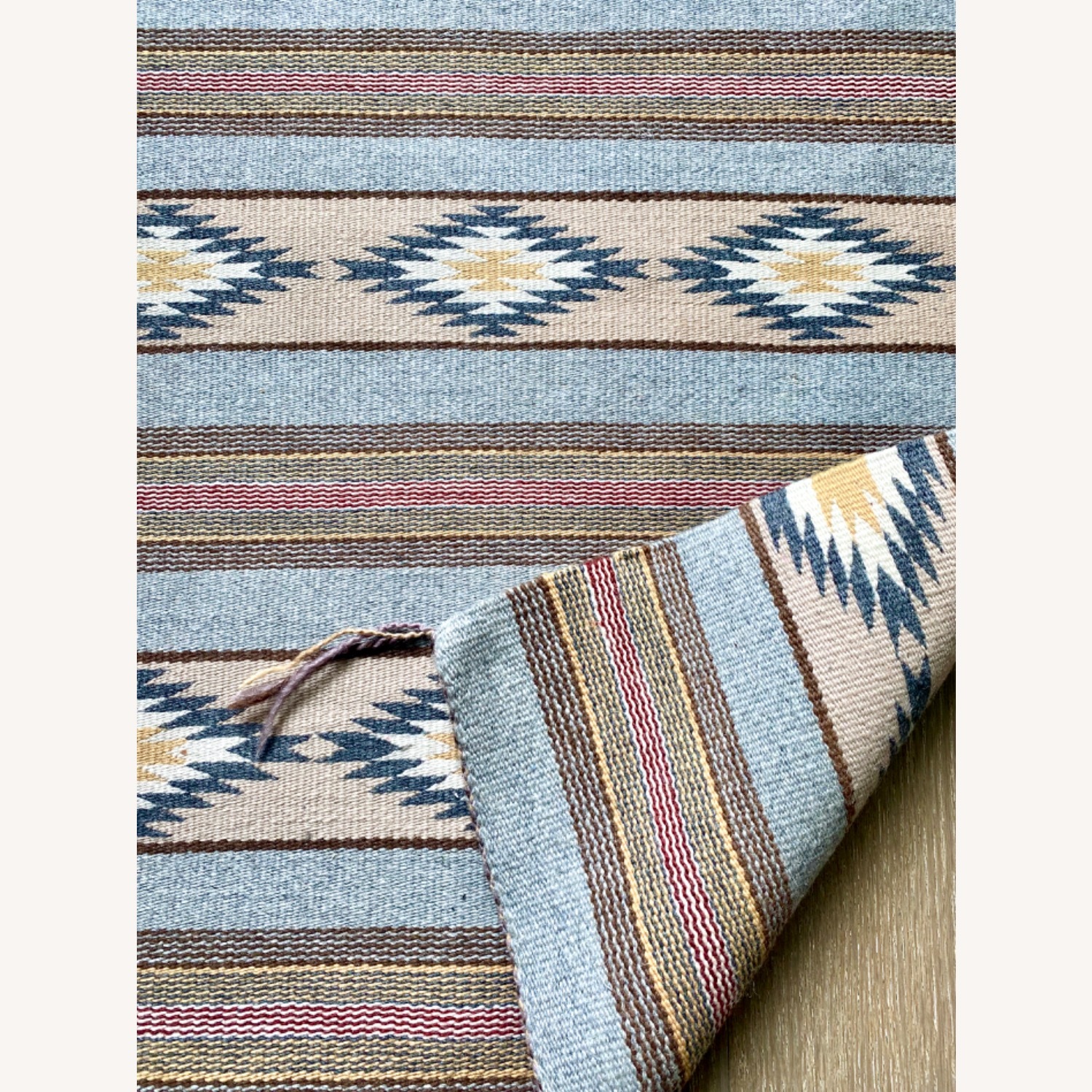 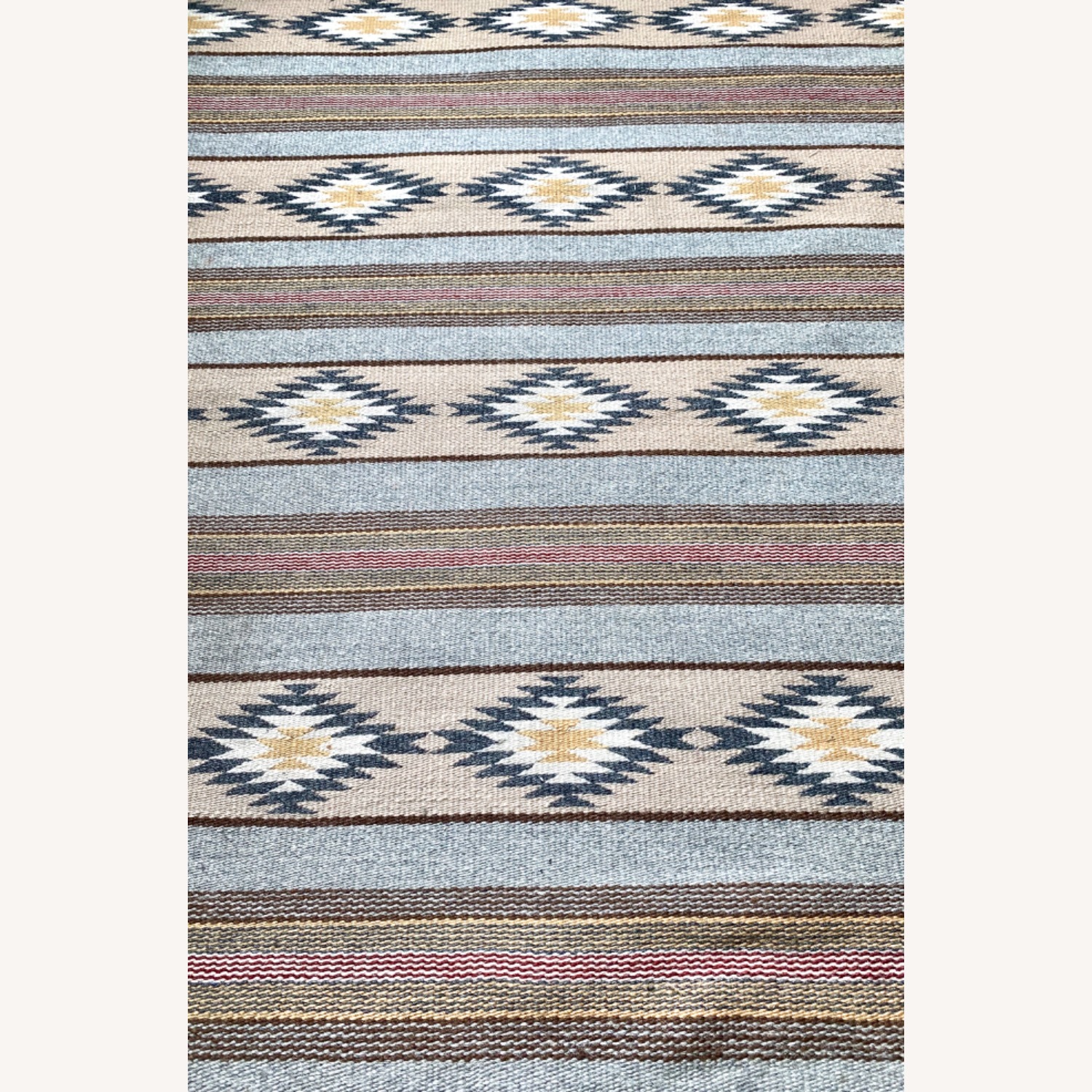 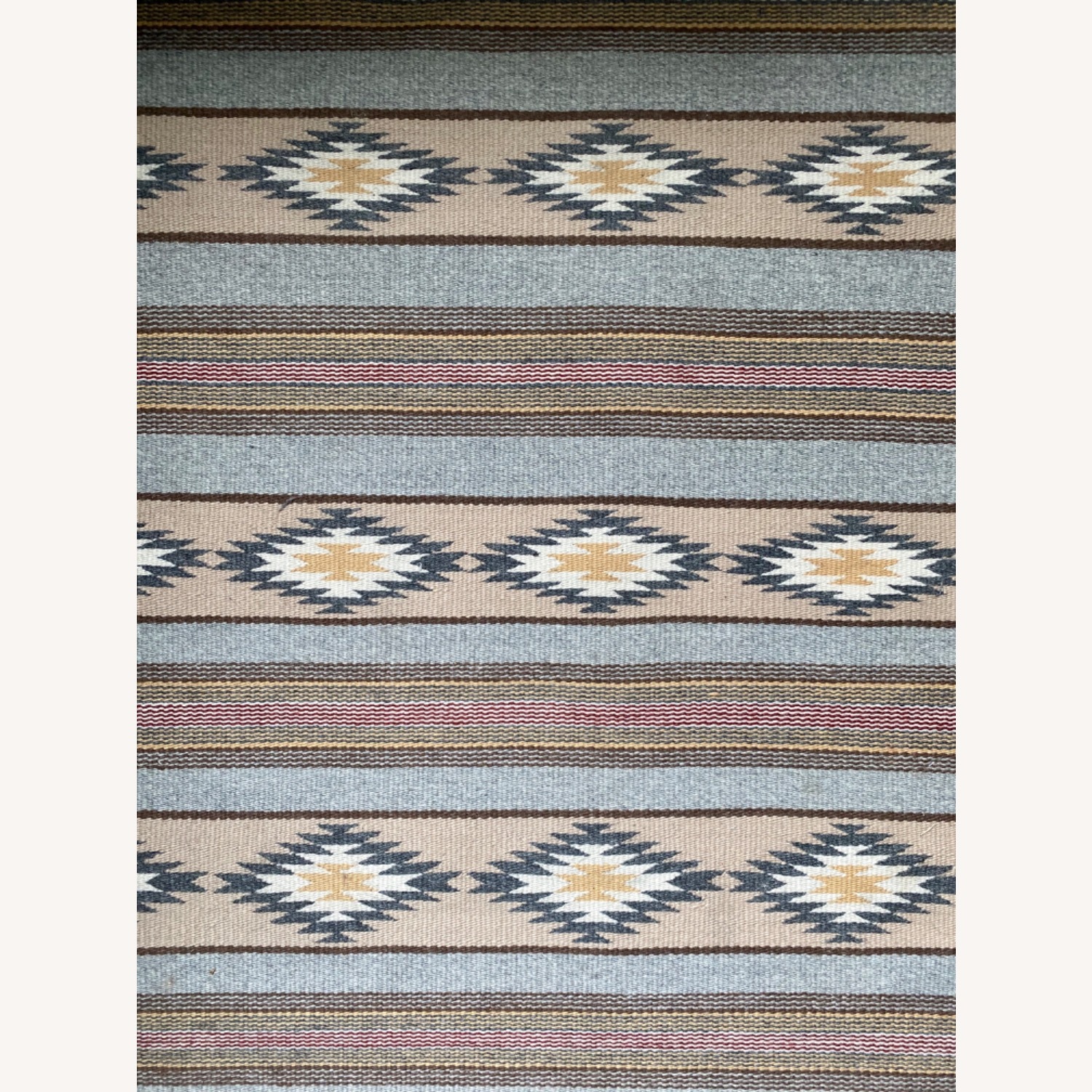 Seller's Notes: Native American Indian Antique Navajo Kilim, Country of Origin: United States of America, Circa Date: Early Twentieth Century – Here is an intriguing and decidedly modern antique handwoven rug – a Navajo kilim rug that was woven in the United States during the early decades of the twentieth century. This exciting and unique composition boasts a captivating geometric composition that draws the eye ever closer. An intriguing pattern seemingly endlessly stacked on now another, is the sole ornamentation of this vintage kilim, save for narrow horizontal darker and lighter bars that form around the geometric patterns. Appealing from any angle, this unique and inventive kilim is an eye-catching example that beautifully showcases some of the finer and more intriguing elements of modern design. This work if art is a unique and dynamic work that is sure to delight. American Indian Kilim Weaving traditions in the incredibly diverse Native cultures of North America date back hundreds of years. This particular rug, which comes from the Navajo tribe circa 1920’s, shows the intricate geometries and preciseness of form that these master weavers are able to accomplish. Vintage and antique Navajo rugs are beautiful and lasting testaments to the skill and craftsmanship of the Native American weavers of the South West. Anthropologists suggest that the people of the Navajo tribe learned weaving in the 16th Century, from Pueblo Indians who at that time we fleeing Spanish rule in what is now northwest Mexico. The Navajo people took in the Puebloan refugees, and in return, the Pueblo people taught the Navajos the skill of weaving. However, the Navajo people themselves have a different belief about how the knowledge of weaving came to them: In folklore tradition, an entity called Spider Boy brought the first loom to his people, which he had created by harnessing the power of the sun. The story goes that Spider boy used bolts of lightning to create the weft fibers, and streams of rain for the warp. After the loom was created, a being named Spider Woman taught the Navajo women to weave. Regardless of how the Navajo People learned to weave, they became some of the most masterful artisans in North America. This particular vintage Native American Indian / Navajo Kilim rug, with its neutral palette of cream, grey, blue and brown, and modern geometric design, would make a wonderful addition to any modern home. 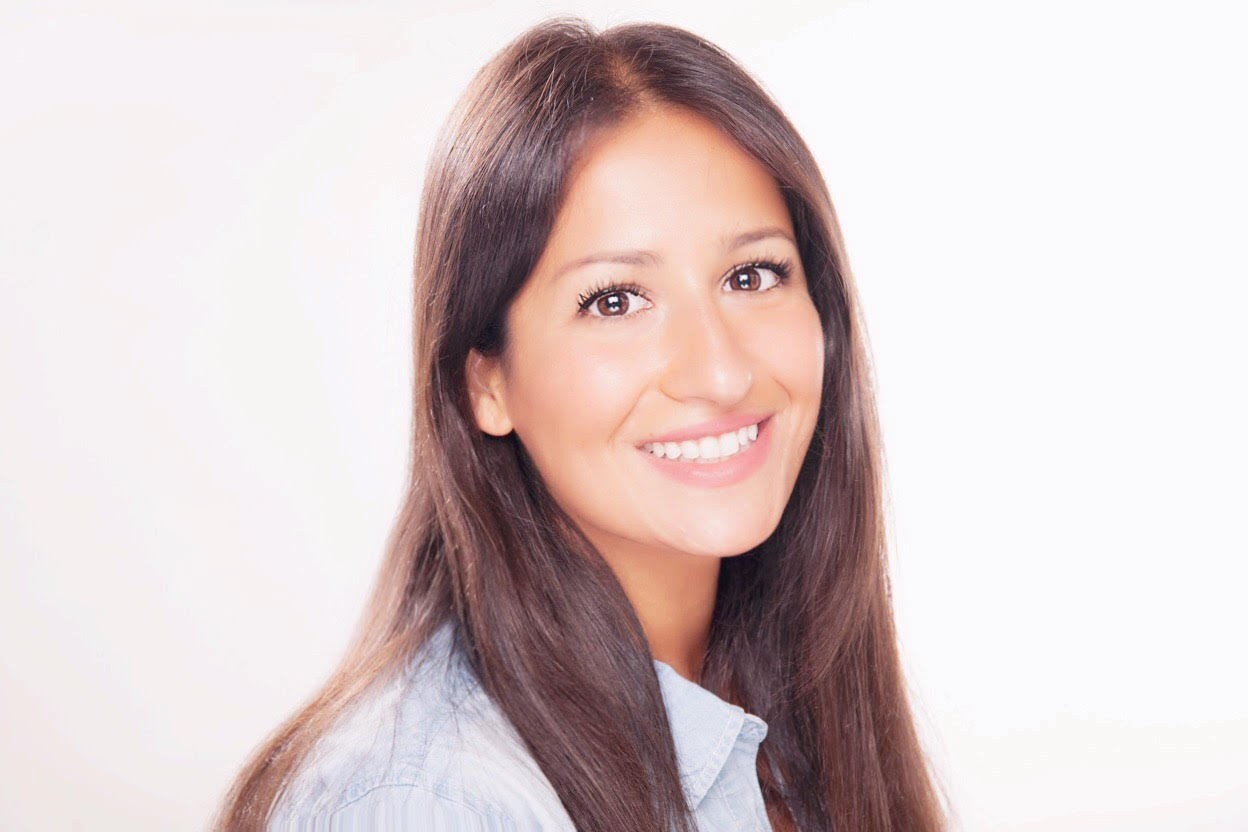